The sunny kingdom on the Iberian Peninsula captivates many visitors with its beautiful landscapes, a comfortable climate and pure, azure waters of the warm Mediterranean Sea. The perfect combination of natural conditions with a high standard of living and a developed social infrastructure of the country is an ideal reason to buy a villa in Spain in one of its many great autonomous communities.

Obtaining any type of real estate anywhere in the country opens up new prospects for citizens of other countries. The ability to receive additional rental income or the possibility of permanent residence on the coast, and the feeling of privacy when living in your own home, are just several of the many perks of owning a property in Spain.

Each region of the country is rather unique and worth paying attention to. Snow-capped mountain peaks, wide sandy beaches, semi-deserts scorched by the sun, turbulent mountain rivers, and quiet, pristine lakes, everyone is going to find something suitable to their liking here. From Galicia and Aragon to Extremadura and Castilla–La Mancha, each of these regions is just perfect for spending your time there, be it a permanent or temporary vacation.

Nevertheless, most foreigners tend to choose the Mediterranean provinces of the country as a place for holiday retreat or permanent residence. Villas in Spain in Torrevieja, a city on the Costa Blanca in the province of Alicante, are capable of fulfilling even the most exotic dreams. 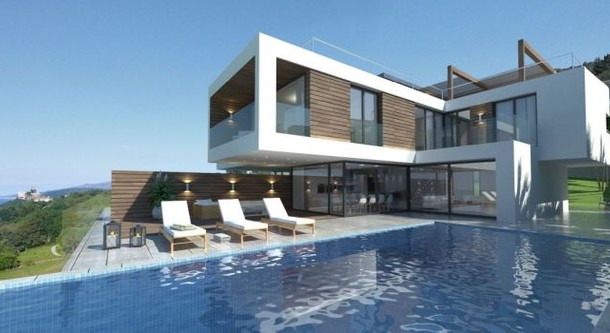 This is one of the most cosmopolitan regions in the country. Over the decades, it attracted hundreds of thousands of visitors from Great Britain, Russia, France, and the Scandinavian countries. Many of them liked staying here so much that they started forming cities on the east coast. This factor plays in favor of the decision to buy a villa in Spain for many as plenty of buyers prefer living close to their compatriots.

Of the many suggested answers to the question of which villa to buy in Spain, you can be sure that there is some unique villa waiting just for you. It can be a spacious property on the first line on the coast or something more private, situated in a secluded place away from the sea and the bustle of the streets.

There is a large variety of villas in Spain that are extremely unique and different. They are built according to the tastes of the buyer only from the high-quality, environmentally friendly materials. New buildings and secondary housing may differ in area, plot size, as well as, in the number of rooms, arrangement of the adjacent territory and some additional services.

The current price for villas in Spain is determined by many factors. Professionals with many years of experience from the Woodmarkgroup real estate agency will help you to correctly analyze the current situation on the market and suggest the best options according to your budget, wishes and needs.

We personalise the content and ads on this website to be more relevant to our users. To do this, and to analyse website traffic, we and our partners use Cookies and also collect, share and use certain limited personal information. Click "Ok" to agree to this and continue. Alternatively you can learn more about how we and our partners use data, and adjust your settings through the "Learn More" link. Ok Learn More
Leave a message
Request a Call

Woodmarkgroup
Please, fill in this form. We will call you back at your preferred time later.
+